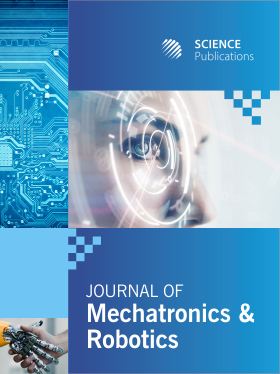 Switching from Flat to Spatial Motion to 3R Mechatronic Systems

Copyright: © 2021 Relly Victoria Petrescu, Raffaella Aversa, Antonio Apicella and Florian Ion Tiberiu Petrescu. This is an open access article distributed under the terms of the Creative Commons Attribution License, which permits unrestricted use, distribution, and reproduction in any medium, provided the original author and source are credited.

The anthropomorphic robots are part of the classical series of mechatronic systems, being in the form of arms and having at least three space rotation, to which other components may eventually be added, thus lengthening the entire kinematic chain. You can also add all the planetary or spatial rotating arms or others that are translating. At the end we always have the end effector element that can be a manipulator, that is, a hand to grasp the objects, in which case one can speak of a prehensive device, that is a gripping device that today imitates very well a human hand even if it is one mechanical, may also be a painting, cutting or welding device, or one for machining. The base support and schematics of all anthropomorphic robots remain the 3R space system. It has been presented in other works and studied matrix spatially, or more simply in a plan, but in this case, it is necessary to move from the working plane to the real space, or vice versa, passage that we will present in this study. Projections of point M on planar axes will be marked with the higher P (Plan) index to distinguish them from the corresponding space axes. Due to the fact that the vertical projection plane is removed from the Oρ axis with a constant distance a2 + a3, (the vertical working plane does not project directly on the Oρ axis, but on an axis parallel to it distal to the length a2 + a3) the projection of the M point on the horizontal plane of the space will not fall in M 'but at the point M''. Therefore, the projections of M on the axes Ox and Oy will not be those of point M' but those of point M'', according to the relations given by the system (2). We want to remove the angle of 90°C from the relations (2), which had an important explanatory role in the understanding of the phenomenon, to see how the equation of transition from plane to spatial axes is written, here (in the horizontal plane of space) about a rotation, whose relations should not be automatically detained, but deduced logically, which is why we will immediately move from the logically determined system (2) to the convenient system (3), which will now be obtained from (2) the angle of 90°C from the trigonometric relations. Perhaps the method used may seem rather difficult, but compared to spatial matrix methods, it is extremely straightforward and direct, contributing to transforming the space movement into a flat, much easier to understand and studied movement. In the system (4) we centralize all the transition relations from the plane to the spatial movement.