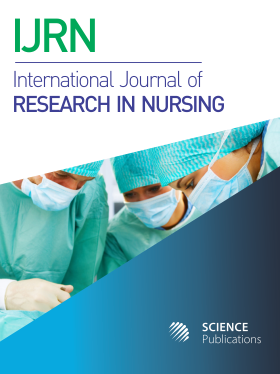 Ramalingam Shanmugam1
International Journal of Research in Nursing
Volume 3 No. 2, 2012, 38-47

Copyright: © 2020 Ramalingam Shanmugam. This is an open access article distributed under the terms of the Creative Commons Attribution License, which permits unrestricted use, distribution, and reproduction in any medium, provided the original author and source are credited.

Globalization in this 21st century unifies nations. The globalization impacts positively to promote trade and services among the nations but it could also harm economic growth and technological innovations in nations as their capital are drained to elsewhere. On its own merits, the globalization is a true manifestation of an open economy. The medical profession is not immune to this phenomenon: globalization. Mainly for the sake of affordability, many patients in much advanced nations, often voluntarily, seek medical services in far less underdeveloped nations. In other times, some patients are incited by their health insurance industries to practice medical tourism. The medical tourism creates an economic turmoil. Several medical economists are quite puzzled by the advantages as much as by the damaging impacts by the booming popularity of the medical tourism. It is time that all consequences of the medical tourism are examined in details as the findings would benefit the patients, the health policy makers and health industries. Such are the aims of this article. This article applies a data mining approach to compute and interpret economic indices, in a novel manner, to portray the economic booming in the hosting nations which render the medical treatments to the patients who emanate from the guest nations. Using the variations in the medical tourism data, a principal components analysis is performed to group the medical treatments and separately to group the hosting nations in terms of their closer proximities. According to the principal component analysis of the medical tourism data, there are three groups of nations which provide the treatments. The first group consists of USA, Columbia, Costa Rica and Nicaragua. The second group consists of India, Israel and South Africa. The third group consists of Jordan, Thailand and Malaysia. Also, an analysis of variance is performed to assess the significance of the factors on the cost of the medical treatment. Performing likewise on the type of the medical treatments which the medical tourists seek, there are three groups. The first group consists of medical treatments: heart by-pass, angioplasty, heart valve replacement, hip replacement, hip resurfacing, knee replacement, spinal fusion, gastric sleeve and gastric by-pass and lap band and liposuction and ivy treatments. The second group consists of tummy tuck, breast implants, rhinoplasty, facelift, hysterectomy, cornea and retina. The third group consists of dental implant and Lasik eye-surgery. The analysis of variance reveals that the nation Israel differs significantly from the hosting nations Columbia, India, Jordan, Malaysia and South Africa. The nation India differs significantly from the hosting nations South Korea. Furthermore, the Gini’s index of heterogenity and entropy index of heterogenity are computed as these indices capture the cost data volatility. These indices are then standardized and interpreted. Among the nations from which the medical tourists seek treatment in other nations, the nation USA emerges to the top in the list while Israel, India, South Korea and Thailand are emerging to the top in the list for treatments by the medical tourists. Interestingly, the cost differences among all other nations are not significantly different. The medical tourists concentrated on nations: India, Malaysia, Columbia and Mexico in its descending order of importance for the medical treatments: heart bupass, ental impant and liposuction in its descending order.