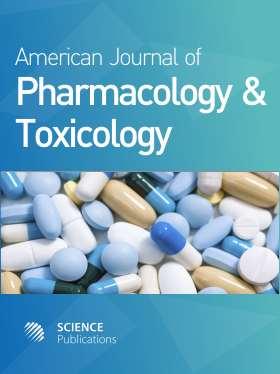 Copyright: © 2021 Abdullah S. Shatoor. This is an open access article distributed under the terms of the Creative Commons Attribution License, which permits unrestricted use, distribution, and reproduction in any medium, provided the original author and source are credited.

Problem statement: Hawthorn comprises more than 200 species worldwide but very few species have been used medicinally. In Mediterranean region, the predominant species of the genus Crataegus is C. aronia syn. Azarolus (L). The extracts or tinctures prepared from the leaves, flowers and/or a fruit has been used traditionally for the treatment of different diseases including different cardiovascular problems. This species (C. aronia syn. Azarolus (L.)) has not been adequately studied. Thus, we aimed to investigate for the possible acute and sub-acute toxicity of C. aronia syn. Azarolus (L.) on Wistar albino rats. Approach: The phytochemical screening of the aqueous extract of C. aronia syn. Azarolus (L.) was determined. A six Wistar rats of both sexes weighing 180- 200 g. were divided randomly into sex groups of 6 rats each. The first group was the control group and fed with equal volume of distilled water, while the other 5 groups were given single daily dose of the aqueous extract per os at different doses (100, 200, 500, 1000 and 2000 mg kg-1) for 28 days. The observation of acute toxicity and the sub-acute effects of the extract on the hematological, coagulation, Liver Function (LFT) and renal function parameters were reported. Results: The phytochemical screening of the aqueous extract of C. aronia syn. Azarolus (L) indicates the presence of flavonoids, terpenes/sterols, saponins and tannins. There were no signs of acute toxicity and no fatality. There was significant increase of the Red Blood Cell Count (RBC) and Packed Cell Volume (PCV) in rats given the extract at dose of 200 mg kg-1 but not with other doses. Furthermore, the Prothrombin (PT) and Activated Partial Thromboplastin Times (APTT) were significantly increased in rats given the extract at doses of 100-500 mg kg-1. There was no changes in the level of LFT, renal function and electrolytes. Conclusion: This study indicates that C. aronia syn. Azarolus (L.) whole plant aqueous extract has no acute or sub-acute adverse effects when administered under or equal to the dose of 2000 mg kg-1 body weight. The increase in the RBC, PCV as well as PT and APTT needs further studies.